Between 2007 and 2012, Vertigo, an imprint of DC Comics, published a series called Northlanders by Brian Wood. It was comprised of various stories set in the Viking Age spanning the attack on Lindisfarne to the battle of Clontarf in Ireland in 1014. Some stories spanned multiple issues while others were one-offs.

The first story arc, later collected in one volume, is called “Sven the Returned.” It tells the story of the not very originally named Sven who goes from Mikligarður, or Constantinople, to claim his inheritance in the Orkneys. His father has recently died and the place has been taken over by his evil uncle.

The story is rather pedestrian, a simple tale of coming back for revenge better done in Hrafn Gunnlaugsson’s movie The Raven Flies and hopefully in the upcoming Northman by Robert Eggers. The characters are rather one dimensional and a Saxon invasion of the Orkneys at this time seems unlikely.

Nevertheless, the story does show the Viking World as a whole, reaching from Mikligarður in the east and all the way to the Faroes in the west. The fact that Sven has served in the Varangian Guard marks him out as tougher than his opponents, in much the same way that having served the Eastern Empire was seen as a mark of honour in the Icelandic Sagas.

Sven, having seen the world and met Muslims and Orthodox Christians, sees himself as culturally superior and less superstitious than his contemporaries who stayed at home, which probably would have been the case. A whole series set in Byzantium would probably have been more interesting, but at least the Orkneys finally get their due as an integral part of the Viking Age.

Northlanders was cancelled in 2012. Perhaps Wood’s previous series, DMZ set during the second American Civil War, may yet prove to be more historically accurate. 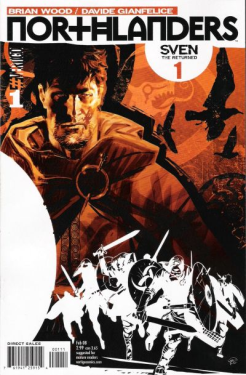